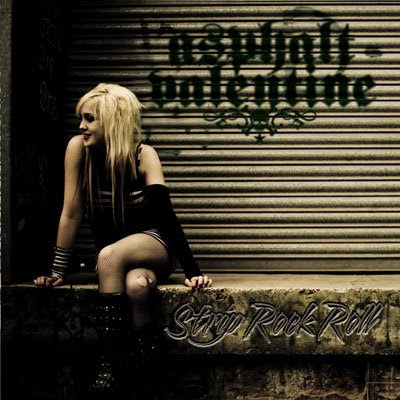 "It's not often you get newer bands that take you back to the days when Rock was nothin but Rock, you guys have the 80's attitude/style...reminds me of Motley Crue mixed with Skid Row...I dig it!"
Erin-ROCK 100.5 Atlanta
(Sa zicem.)

"These guys are BADASS!!!"
Tracii Guns-LA Guns/Brides of Destruction
(Corect!)

"These guys are pretty damn good, we'll have to keep our eye on them!" Jizzy Pearl-Ratt/Love Hate
(Cu siguranta!)

"This band truly shows that they are worthy contenders in the rock ring."
Lucky-Editor Sugarbuzz Magazine
(Printre multi altii.)

Rock and Roll; an oft used term in music, yet seldom correctly. There is so much more than just playing songs really loudly. Arrogant swagger, infectious groove, unbridled sexuality, heart racing rhythm, undeniable passion, swing, sway, and soul are what separate Rock and Roll from the rest of its musical counterparts. ASPHALT VALENTINE is without a doubt a rock and roll band. Five Atlanta based musicians got together to combine all those aspects of the 'spirit' of Rock and Roll. "How's about you and me, mix a little gasoline, just to see how long, we can make it burn". That being said, the band set out to write and perform songs with that tone in mind. Influenced by every musical note they have ever heard, ASPHALT VALENTINE fused them all together: the attitude of punk, the glam of decadence, the melody of pop, the blare of hard rock, the naiveté of youth, the worn weariness of country, and the soul of the rhythm and the blues.. After a few lineup changes over the yers, ASPHALT VALENTINE finally found the perfect combination of seasoned veteran musicians to fulfill their quest to rock n’ roll. 2009, the year the world gets to Strip Rock Roll! (www.myspace.com/asphaltvalentine2)

Amiable fill someone in on and this post helped me alot in my college assignement. Thank you as your information.